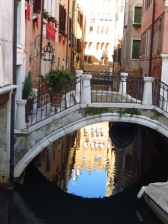 We lasted THREE (3) weeks on our trip to Europe each of us with only one carry-on suitcase. In the winter. That’s right: a few pair of pants, a few tops, washing every few days and drying over the towel racks, and VOILÀ.

It made me wonder when I returned home: Why do we need SO MUCH STUFF?

I overbuy. We overbuy. I buy when I’m bored, when I’m lonely, when I’m procrastinating. Then, I buy too much. Stuff I DON’T NEED. It’s the American way. Well, no, it’s the “affluent” way that keeps economies rolling and people in debt and working. Newspapers in Europe in early January carried articles bemoaning credit card debt (along with extra pounds) as the left over (maybe hung over, too) “blessings” of the holiday season.

I came home and threw out three pairs of socks that I absolutely hate to wear, but keep in my drawer because I made the mistake of buying them in one of the multi packs that Target and Costco sell. “Heck, I’m getting all these pairs for so little money!” I say to myself. And I end up with a bunch of things I don’t want and feel guilty about so I keep them, stuffed into already over-stuffed drawers and closets. When it’s dark in the morning, I grab a navy blue and black sock and wonder when I get to work, how THAT happened. Or wear navy blue hose with a black skirt. I hate that.

I think Henry Ford had the best idea. Black. Any color you want as long as it’s black. Wouldn’t that simplify our lives? And out of sheer boredom, we wouldn’t go shopping so much. Who needs another black outfit? And then the retail industry would falter, the automobile manufacturers would crash, and the worldwide economy would swoon. For a while. And then, all the brain power that drains into marketing stuff we don’t need would flow into important things like global warming, electric cars, solar energy, public transportation in Los Angeles, and real transporters, like on Star Trek, so we wouldn’t have to endure endless, cramped air travel to far-away places. We could live unencumbered.

Stuff makes me stuffy. It weighs me down. It forces me to pause to organize, dust, and categorize it instead of creating, thinking, writing, reading, and loving.

I’m de-stuffing this year. In fact, I read somewhere, that when you go into a drawer, a closet, or a cabinet to remove TEN THINGS in it and throw them away. I almost lost my wedding ring that way, but sanity prevailed. I get carried away sometimes, but I don’t want to get carried away by my stuff. Please. Don’t bury me with it. I plan to enjoy the other side. Without stuff. Heck. Without clothes at all!

We all voted and it’s unanimous. The Project Lifestyle (TPL) is a means to sanity in an insane world.

Life is a project. Webster’s defines project as: “an individual or collaborative enterprise that is carefully planned and designed to achieve a particular aim.” Hah. No more needs be said, right? We are born as individuals. Most of us collaborate along the way… especially at the beginning. The planning may or may not be done carefully, but still, the aim is to live, somehow, and get to the end. Death. There is nothing in the life project that says we need to get there in one piece even. Nor does it say how long the project will take, either in the definition of project nor in the definition of life. We’re good so far.

The Project Lifestyle as defined here will be one that accepts that each undertaking, each life event, each age, party, move, educational rung, job, business, relationship (yes, those, too), and just about anything you name has a project nature to it. Why I like the project lifestyle: There’s an end. That’s why they’re so cool. Start here. End there. Like Monopoly or something. Closure. Relief. It is over. The end, however, does not say that the project was necessarily good. No. It does say that it existed, and that it has been completed — good or bad, it’s done. That’s why people like hobbies, usually. In. Out. Done.

Everyone uses the Project Lifestyle. They just don’t know it. Or, they don’t know that it’s got a name, mostly because I just made it up. Anyway, the people that gain the most from it are those that realize it exists and capitalize on the good space it creates in one’s psyche. Parents use it. There is the baby project, the cute years between three and ten, and then there’s the dreaded teenager project. These projects all come to an end. Thank goodness. Then there’s the empty nester project, the retirement project, and the doddering, forgetful project spent mostly looking for stuff that they just had a minute ago.

Mini projects are tucked into each of the parent projects above: birthdays, discipline projects, organization projects, PTA projects, lessons and so forth. Adults with or without children have things called jobs. Those are projects. Entrepreneurs have projects. Retirees have projects: the figuring-out-how-to-retire project and then the-deciding-what-the-heck-to-do-while-retired project based on how well you did the job project or the how-to-fund-your-retirement project. Politicians, plumbers, pediatricians. All have projects.

When Do You Use TPL?

Each project begins and ends. That’s why so many people like their hobbies. They’re little projects that get done a little at a time, but they get done, and people are happy from the result. David Allen of “Getting Things Done” fame says people often don’t start projects because they’re too big. Yes there’s that. So the life project is an amorphous thing that

happens to us if we let it, and often there’s no formula or system to it. The unplanned life project is usually not very satisfying. The David Allen secret is in having projects be a series of steps, so that the question isn’t “How do I make a frictionless freeway?” (which would likely put anyone’s mind in a dither) but rather ask: “What’s the first step?” For instance simply answer the question, “What is friction?” Then, “What’s the next step?” Answer the question, “Why would a frictionless freeway be cool?” And so forth.

Where Can You Use TPL?

Why Do Projects Work?

To have one big long, blobby, unending, winding, circuitous road with no signs gets you nowhere fast. Plus it makes you nuts. Projects are great. They have lids. They’re contained. They begin. They’re (hopefully) organized and get more so with practice! With luck, projects and the tasks in them are prioritized so the more important ones get done first. OR at least they get started first, so momentum is now shoveling snow from the path, and progress is being made.

So there are actually people that have degrees in project management from the Project Management Institute. You don’t need a degree, though, unless you want a career in it. Otherwise, everyday people can adopt The Project Lifestyle and reap the benefits. It’s a question of starting. Start one. Start another and another. Then finish the first one. Then the second and start another. BUT FINISH.

Or consciously quit, but don’t abandon. Don’t let things die. Kill the unfulfilling project consciously: With a hatchet. A broom. A hammer. Be sure you want it gone. Or finish it. Visit the projects list and the action steps on the various projects often. If there’s one that never moves from visit to visit, consider a resounding, meaningful, ceremonial death.

How Do You Start a Project Lifestyle? Buy David Allen’s Book, Getting Things Done. Or buy other how to books. Read and listen to books written about and by people you admire. Seth Godin has several books on powering through and staying in. He also visits conscious quitting.

Projects rock. They’ll save your sanity. And that’s a good thing.